As a little girl, I told myself that I would never go on missions trips. It was too much work, but that’s not the excuse that I gave. “I just don’t have any special gifts,” was the excuse of choice. Or “I’m not called to this.” “Other people are better at serving.” I had a ton of excuses as to why I shouldn’t go. But in the winter of 2016, amid a slew of deeply troubling life circumstances, I felt God telling me to go.

And so, after some grousing and Satan trying to stop me, I went. And now here I am back in the United States after ten days in Haiti, one of the poorest countries in the world. Several people have asked me, “Why Haiti? Isn’t it kind of a hopeless place?” I’ve also gotten the question, “Why are you going right now? What with everything happening in your life, it just seems like a weird time to go, you know?” Both questions are fair, honestly. Haiti is kind of a hopeless place; radiating a palpable hopelessness that washes over you as you drive through the bumpy, unpaved roads in the back of a pickup truck, the scent of rotting garbage and refuse accosting your nose. And yes, amid the divorce and emotional whiplash that follows, it does seem like an odd time to hop aboard a plane and head down to a third world country to teach a VBS. But both questions have the same answer: God told me to go and I’m going. I don’t need the finer details. I’m just following what He’s telling me to do.

“This’ll be so good for you,” my mom told me as I bundled into the car with my backpack and my suitcase at 2:30am. “You’ll really get some perspective.”

And perspective is exactly what I got. Mr Michael Worthing of Deep River Mission, the house we stayed at, once said, “You might not do much to change Haiti, but Haiti will change you.” It’s hard putting all that I learned in one blog post. I could talk about how overwhelming it was to see a land so covered in garbage, to see a country so wracked with poverty that your own American financial woes fade almost into obscurity as you realise just how richly blessed you are. I could write about what it’s like to be a single mom in the midst of groups of families, and how Christ knits the souls of His people together so that you feel like family, not like a stranger. I could talk about how in love I fell with the kids I worked with, some who had never seen red hair before and decided to play with my hair for hours while asking me all sorts of questions about my life in the United States, or the beautiful and brilliant little girl who remembered every English word I ever taught her, including John 3:16. I could (and will in a separate blog post at a later date) write about how my impression of teenagers has changed dramatically. But for now, I want to share some of the things that God taught me about living in gratitude, trusting Him to provide for us, and living free of anxiety and striving.

Some background before I present some Scripture and my rambling thoughts:

The team of 23 I went down with taught a five day VBS at a school last week. We had three classes: little kids, middle kids, bigger kids. Our mornings were spent singing with the kids and listening to a brief message out in the courtyard of the school before moving indoors to rotate the three groups between a Bible class, craft time, and recess time. After these three activity hours were done, we would sit the kids down inside and feed them plates of rice and beans, prepared by one of the women in the square and served by us in a huge assembly line.


The second day of the week was brutally hot, hotter than it had yet been down here during our trip. All of us were dragging a little bit as we piled into the trucks to head to work. I know for myself, I was not quite rejoicing. I was hot and sticky and sweat was dripping down my legs under my floor length skirt as I held two children with three others clinging to me in the courtyard, singing Creole worship songs under an unforgiving sun. But as the day progresses, and I helped teach the craft hour, my spirits lifted and I got to know individual kids better. When children start going to school in Haiti, they immediately learn French. So where my very bad Creole failed and their broken English faded away, we had French as a linking language to keep communications open. It was fantastic. I was able to actually talk to these kids sans language barrier and understand their personalities. One little girl in the “middles” class stuck out to me because of how sweet and quiet she was. Her name is Wideline and she has the biggest eyes you’ve ever seen, and as I would soon learn, the biggest heart.

After lesson time, we started the assembly line to serve the rice and beans. There was less rice in the pot that day then there had been the day before and this meant some smaller plates. Some of the kids grumbles and complained about the slightly smaller portion size, trying to push their ways back into our scooping station to get more food. My heart broke for them, but I had to tell them to sit back down and eat what they had.

Wideline, however, did not eat what she had. She looked at her friends around her and she divided her food among five other plates, so that others got full portions. She didn’t ask for more, but left with a smile and a “merci!” to the rest of the team. 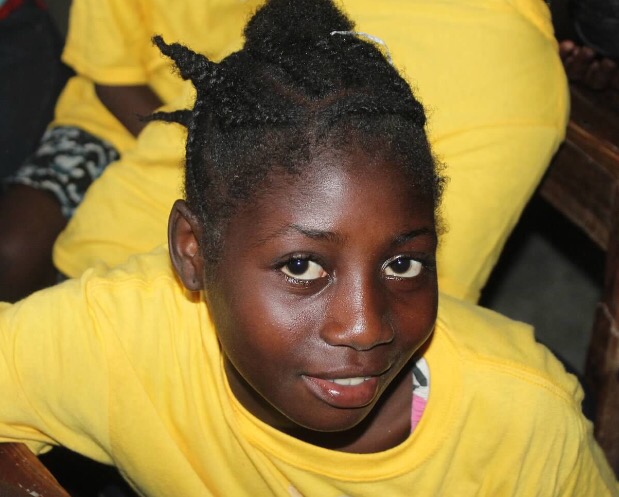 Already emotional about the state of poverty these children were coming from, all in tattered clothes and knowing no more English than to say “give me my money,” I broke down in tears. Here was this little girl who was no better off than her friends, sacrificially giving away her food so that others could be filled. And there I was… fretting constantly about money back in the States, when neither me nor my daughter have gone a day without eating. I haven’t gone wanting, but I don’t have that kind of sacrificial love. I haven’t gone wanting, but I spend too much of my time worrying and being anxious over what I don’t have.

Later that afternoon, God turned my attention to Philippians 4, particularly verses 4-7 and 11b-12.

“Rejoice in the Lord always. I will say it again: Rejoice! Let your gentleness be evident to all. The Lord is near. Do not be anxious about anything, but in every situation, by prayer and petition, with thanksgiving, present your requests to God. And the peace of God,which transcends all understanding, will guard your hearts and your minds in Christ Jesus.”

Be anxious for nothing… This command always hits me like a ton of bricks because I know that I frequently am anxious for pretty much everything. I especially was anxious as I prepared to leave for this trip and prepared to be away from my daughter for the first time ever. But here in Haiti, these kids had every reason to be anxious. And you saw it a lot. I can’t forget the brutal screaming as the kids would literally fight over a soccer ball, or how my English students made my knuckles swell to double their original size when they tried to rip off my silver ring, demanding I give it to them. That’s anxiety. Anxiety makes us grasp after things. But if little Wideline could be so peaceable as to give her food to others, why can’t I let go of my fear that I won’t be accepted wherever I go? Or my fear that I’m not going to have enough money to provide for my daughter? Or my fear that I’m going to die alone?

We anxiously grasp after things we think we need, and sometimes they’re bad things, but if we know Christ, most often we’ll find ourselves grasping after the good things. Food is good. Money is good. Marriage is good. But none of these things make good gods. We turn our anxieties into idolatry and find ourselves serving things of the world rather than serving God. Pastor Mike Ruel reminded us several times on the trip that we are no different from the people we would see in the streets of Haiti. Our physical needs may be vastly different, but our spiritual needs are the same. We all need Jesus. So for those who are in Christ, we have everything we possibly need, whether we’re from Haiti or from the United States.

With Wideline’s sacrifice still playing in my mind and this verse ringing in my ears, I was struck by how often I live in discontent. But my satisfaction shouldn’t be in worldly goods. My satisfaction is to be in the Lord. This is what allows us to be content. I don’t know the state of Wideline’s soul, but I know the state of mine. I know that if I claim Christ, I should share her attitude of being grateful for what I have and willing to share it with others.

I left for Haiti fretting and grumbling (as some of the team can absolutely confirm since they saw me grousing at work the day before we left). But I’ve come home willing to let Christ be my satisfaction and my Rock. I trust Him to provide for me. If God could use 23 Americans to come bless a few Haitian kids, what on Earth makes me think He won’t take care of me too? I needed to go on this trip. I know I got the opportunity to bless some of the kids there, but I never expected to be so overwhelmingly blessed there by the things God had to show me. There’s still much work to be done, both in Haiti and in my own heart, but I trust that He who began a good work here will carry it on to completion until the day of Christ Jesus.

Passionate Christian, living fearlessly. I'm a happy wife, a homeschool mom, a writer, and sometimes a singer. But above all, I belong to Jesus Christ and seek to proclaim the good news of His gospel! View all posts by Emily Waters